Is there any Evidence that Chess Grand Masters have a Chess Game Neural Implant?

One of the benchmarks for computer processing power and for artificial intelligence algorithms has revolved around getting computers to play chess more and more competently. 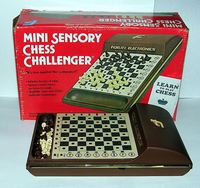 Chess is considered to be a very serious game and serious chess players are very serious about it. In fact, they even have Grand Masters of chess, whom often spend a great deal of time studying and analysing the moves and the strategies that were used in past games.

Chess is so popular that there are even chess playing and game analysis apps available on smart phones (the image above on the right shows an early computerized chess game). Computerised chess has advanced so far that the chess world was recently shocked because a chess grand master was caught cheating by regularly disappearing off to the toilet where he had a chess analysis program on his mobile phone (hidden behind the toilet bowl) analyzing the game he was currently playing.

Based on the above, then if we are being simulated and we do have our technological developments slowed down then you’d expect that people and particularly grand chess masters would very likely have a chess implant IN THERE HEAD. Is there any evidence of this?

What Would a Human Chess Game Implant Likely Offer in ‘Experience’ terms to those that had this?

Well, firstly, based on the observed development of chess programs we have now and the behaviour of chess enthusiasts then you can easily deduce what sort of generic functions a neural chess implant enhancement would have.

Save & Recall Feature: Your past games would be saved such that you’d be able to recall and evaluate your past ‘game’ strategies BUT ‘here’ this wouldn’t be presented on an internal visual chess game display this recall will be presented as if it is part of your normal memory (because this is the best way to keep it obscured and negate ‘larger’ scale thinking about ‘possibilities’). Basically, anyone with this type of chess implant is likely to have way better recall specifically of chess games compared to other past experiences and events.

Built in Chess Pieces Moves Rules: You’re internal chess program will of course automatically ONLY ALLOW ‘valid’ chess moves to be made. Such an implant simply wouldn’t allow ‘illegal’ chess board moves. In not allowing illegal chess board moves to be made, it would never ever save these either and therefore such and implant wouldn’t ever recall illegal chess moves either because it wouldn’t actually allow such moves to be carried out.

It’ll Play Chess: It is likely that such an implant will play chess.

Has Any Research Evaluated Chess Grand Masters in terms of their Memory Abilities?

I’ve made an effort above to point out ‘deducible’ chess memory recall ‘illegal’ move possibilities because I found the below on the wikipedia eidetic memory page:

“An example of extraordinary memory abilities being ascribed to photographic memory comes from the popular interpretations of Adriaan de Groot’s classic experiments into the ability of chess grandmasters to memorize complex positions of chess pieces on a chess board. Initially it was found that these experts could recall surprising amounts of information, far more than nonexperts, suggesting eidetic skills. However, when the experts were presented with arrangements of chess pieces that could never occur in a game, their recall was no better than the nonexperts, suggesting that they had developed an ability to organize certain types of information, rather than possessing innate eidetic ability.”

Having already deduced above that a chess implant would allow and then wouldn’t save ‘illegal’ chess board piece moves they’d not be recalled either then the description above of the poor recall of chess masters specifically or games of boards that involved, illegal chess moves is coincidentally exactly what you’d expect if someone had a chess implant that didn’t save and therefore wouldn’t recall invalid chess moves.

Someone with a chess implant of this type would have excellent ‘enhanced’ recall of a chess game involving valid, legal chess moves and poor recall of games and or of specific moves that were NOT legal.