On the last page I pointed out that it’s possible that some people here are simulating someone with a chess playing implant that saves and recalls chess moves and games . . . on this page I’ll point out some 3D visual, spatial memory coupled with architectural drawing skills as well as spectacularly realistic 3D artistic drawing skills. 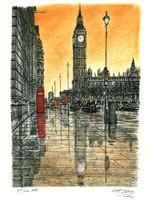 Stephen Wiltshire (called the human camera by some) seems likely to be simulating someone that has a very accurate 3D architectural drawing implant.

He has been filmed drawing a highly accurate and detailed sketch of various London landmarks that included over 200 buildings, with each drawn to scale and in the correct perspective. All done from memory after observing it all from a helicopter journey that lasted just 12 minutes! 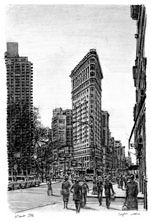 So, he’s considered to have a ‘camera like memory’ recording everything that he saw during a 12 minute helicopter journey over the city.

Later, he’s able to accurately recall and draw views of the city with the correct 3D perspective.

However, just a few seconds of thinking are needed to realise that a camera memory very likely isn’t enough. He’s drawing a panoramic view from views from a moving helicopter likely flying along parallel to the end panoramic view.

This implies that he has an internal 2D to 3D translation, referencing and viewpoint system (which would require images from different view viewpoints to reconstruct an accurate 3D view from one viewing place) that uses all of the journey views to construct an encompassing panoramic view accurate from one fixed ‘aerial’ point

You can get some idea of what I mean by looking at this page here which is of him in the middle of drawing a panoramic view of Singapore FROM MEMORY.

The video below is of his helicopter journey and then of him drawing the view afterwards.

Stefan Pabst draws what are described as hyper realistic 3D drawings. Basically, he very accurately draws an object/subject which from a very specific viewpoint appears to be ‘real’. Below is a speeded up video of him drawing a snake.

This is what I’d expect if someone had a 3D Graphics ‘Blender’ type implant that maybe even inputs and translates specific external objects into an accurate 3D image.

Once the image is captured and in 3D format you’d have filter options which would include shading and lighting. I’ve noticed that Stefan’s drawings seem to have very accurate shading and also they are drawn with very specific lighting effects that enhance the 3D appearance of the image. You would expect lighting effects to be integral to a professional grade 3D image renderer and particularly one that had artistic leanings.

What about ‘Blind’ people Painting in Exceptional Ways?

On the ‘Discovery Channel’ series named “The Super Humans”, in one episode a completely blind man (from birth) is presented that paints perspectives with amazing accuracy, almost as well as a sighted person (the video is here). What he does cannot be explained by science to such a degree that he has confounded the ‘expectations’ that science has on some aspects of ‘eyesight’ and how they ‘thought’ the brain works.

Examples of Accurate Realistic Drawing ‘Geniuses’ in the Historical Past

Gottfried Mind was born in 1768. At the age of 8 Gottfried was placed in an art academy because despite having a very weak ‘constitution’ and being incapable of hard work, he had a talent for drawing.

He eventually focused on drawing extremely life like cat’s. The below is taken from wikipedia:

“Mind seldom drew from Nature; at most he did it with a few strokes. His conception was so strong, that whatever he had once strictly observed, stamped itself so firmly in his memory that, on his return home, and often a considerable time afterwards, he could represent it with entire fidelity. On such occasions he would look now and then, as it were, into himself; and when at these moments, he lifted his head, his eyes had something dreamy in them.”

How Far Behind is our Technology Compared to the Original Population we are Simulating?

So, the above perhaps early simulated human enhancement example was from 250 years ago . . .

In other words this gives you ‘some’ idea of how much our technologies here have been slowed down compared to the original population we are simulating.

PLEASE NOTE: For those of you that have ‘landed’ on this page then you should read the first and second ‘simulation’ series to gain context. There are very ‘rational’ reasons as to why you’d HAVE to slow the rate of technological development down if you are simulating copies of self aware people . . . this is all explained in very worrying ‘reasoned’ detail in the second series.

IMPORTANT - These 'posts' in this specific category present Satirical / Surreal angles on new age, ascension and spiritual areas. The rest of this sites pages & posts are very, VERY 'Serious'.

These pages are of a single phone healing session (with audio’s) illustrating the detail and sheer ‘volume/numbers & variety’ of subtle paraphernalia identified and worked on in attempts to identify ‘ALL’ the subtle body/form ‘originated’ causes of lack of money & poverty issues!!

Earth as a Simulation Article Series 1:

Why the 'Spiritual' sayings of our new age population are correct if they were describing accurately copied people living in a copied duplicated reality?

Earth as a Simulation Article Series 2:

Gives evidence that our new age people are simulating the Supporters of a ‘simulated’ Copied Reality project.

Earth as a Simulation Article Series 3:

How all discussions and research of anomalous things/personal experiences as well as memories of these are all HIGHLY anomalous . .